The struggle over the memory of Nazi-Islamist alliance

Since the vicious massacre in Iraq known as the Farhud—the Pogrom of 1941 in Baghdad following the Sack of Basra on 7–8 May, 1941, many scholars among the Jews who left Iraq had been trying, largely in vain, to keep it alive in the Jewish collective memory. The Jewish Holocaust is widely believed to be confined to European Jewry only, and it overshadows all other calamities of WWII outside Europe.

In the Arab World, most of all in Iraq, a conspiracy of silence was carefully maintained against the successive massacres committed against Jews since the Farhud of 1941 and the Arab defeat in 1948 War. In Iraq the conspiracy started immediately before the blood of the innocent victims dried, when army and police officers roved the streets of Baghdad, warning the Jews not to testify against the murderers and looters. Even the official report on the massacre was not published until 1958. Later, a few articles were published in Hebrew and English by well-known historians such as Dr. Haim Cohen of the Hebrew University in 1966 and Prof. Elie Kedourie of London University in 1970. These researches drew the attention of very few scholars.

Even when a collection of articles and documents was published in book form—Hatred of Jews and the Farhud in Iraq, edited by Shmuel Moreh and Zvi Yehuda—this strange indifference towards the Farhud continued even in Israel and nearly no official or member of the Israeli parliament attended the memorial anniversary of the Farhud held every year at the Babylonian Jewry Heritage Center in Or-Yehuda.

This important Hebrew publication the pogrom did not succeed in attracting attention from the Israeli media—known for its indifference to subjects which are considered Oriental, communal, or sectarian. Many journalists were not aware of the reality that the Farhud and the transport of the Jews of Libya to Nazi concentration camps in Europe were in fact a part of the Nazi global plan to annihilate the Jews wherever they were—including the Middle East. This Satanic task was handed by the Nazis to their Arab supporters headed by Hajj Amin al-Husayni, the Mufti of Jerusalem. These Arabs did their best to take an active part with the Nazi's anti-Jewish operations.

As in the case of Nazi Germany, the Arab majority believed, under the influence of the Arabic translation of Hitler's Mein Kampf, that the Jews, who helped the British authorities to build a modern administration in Iraq, were conspiring to control and exploit the Iraqi economy and dominate important posts in various Iraqi ministries.

The Palestinian refugees of the 1936 and 1939 revolts in Palestine who escaped to Iraq were headed by al-Husayni. They were shocked to see the great Jewish influence on Iraqi's economy. They sold their political ideology to the Prime Minister of Iraq, Rashid 'Ali al-Gailani, and his national government instigated attacks against the British military Air bases in Habbaniya on 2 May 1941. The defeat of the Iraqi army aroused panic among the pro-Nazi government. Its members and the Palestinians who joined the revolt escaped to Iran and Turkey and later on to Germany. In the resulting power vacuum, the Farhud took place on 1–2 June 1941. According to a list compiled by Dr. Zvi Yehuda, 137 Jews were killed in Baghdad, and 8 Jews outside Baghdad; 2500 injured; children and women were raped; hundreds of Jewish houses and stores were looted and burned. These tragic facts in the East were, however, exceeded by the atrocities of the Holocaust in Europe.

The failing of the Israeli media to see the connection between the pro-Nazi Arab nationalists directed, backed, and equipped by Nazi Germans in the Arab World with that of the Holocaust, was among the main reason why Western Jewry were not aware of the Farhud and the tragedy of the Jews of Libya and Iraq. I visited the Holocaust Memorial Museum in Los Angeles in 1986, I was astonished to find that there was no mention of the Farhud. I wrote a letter to the Director of the Museum, but have not yet received an answer.

Strange enough, only in 2003 did the American scholar Samuel Edelman first hear of the Farhud. This happened not in Israel or the USA, but in Northern Iraq, when he was interviewing Kurdish survivors of chemical warfare. There he heard for the first time of the massacre of Jews in Baghdad in 1941. Only in 2006 was Iraqi historian Prof. Kadhim A. Habib, a resident of Berlin, able to publish, in Arabic, his book on the Farhud and the suffering of Iraqi Jews—The Jews and Iraqi Citizenship, or the Tragedy of the Iraqi Jews between Tyrannical Captivity and Betrayal [by] Forced Expulsion—in the Kurdish city of Sulaymaniyya.

The Iraqi Committee for Investigating the Events of the Farhud, set up by the government of Iraq in 1941, stated that the basic causes of the Farhud were: Nazi activities and propaganda by the German legation in Baghdad, headed by Dr. F. Grobba, his staff of German beautiful young ladies and professors who helped in spreading Nazi ideology among politicians and Army Officers; the Mufti of Jerusalem and his companions; national Palestinian and Syrian teachers who incited their students to attack Jews; anti-Jewish military and police officers who took an active part in killing and refused to give orders to shoot the plundering mobs during the massacre; the German Arab language radio station, which helped to spread Nazi propaganda in Iraq; Iraqi Radio incitement; and the pro-Nazi al-Futuwwa and Kata'ib al-Shabab semi-military organizations headed by Iraqi, Palestinian, and Syrian nationalists. All these facts convinced me that the Farhud was an integral part of the Nazi final solution of the Jewish problem. After studying carefully the ideological bases and the Nazi and pro-Nazi elements that instigated the pogrom, I have arrived at the following results, included in the introduction of Al-Farhud: The 1941 Pogrom in Iraq:

“The research and testimonies in this book demonstrate that the Jews of Iraq were victims of ideology, led by representatives of Nazi Germany and those Arab leaders who cooperated with them in hopes of ending British influence in the Arab world. We are grateful to the U.S. House of Representatives for unanimously passing Resolution 185 on 1 April 2008, which recognizes the rights of Jewish refugees from Arab countries as equal to those of Palestinian refugees. Moreover, representatives of the United States Holocaust Memorial Museum in Washington, D.C. visited the Babylonian Jewry Heritage Center in Or-Yehudah, Israel in 2008, and requested documentation on the Farhud, emphasizing that they accept the Farhud as part of the Holocaust. We think that it is time now to reconsider the possibility that both the U.S. authorities and German government will include the survivors of the Farhud in their list of Nazi victims and an integral part of the Holocaust.”

Since the publication of two comprehensive and well documented books in English, in Israel and the USA, I have hope that the Farhud will be accorded its proper importance in the Jewish History of WWII. The readers in the West can see now for themselves the clear connection between the two tragedies initiated by Nazi Germany. The first book is Al-Farhud, The 1941 Pogrom in Iraq, edited by Shmuel Moreh & Zvi Yehuda. The second is Edwin Black's original, outstanding, comprehensive and painstakingly researched The Farhud: Roots of Arab-Nazi Alliance during the Holocaust.

Black arrived independently at the same conclusion and faced not only indifference, but also strong opposition towards his daring results. In fact, this second important book on the Farhud is considered one of the best books on the Common Jewish Destiny during the WWII and the cooperation between Arab Nazi leaders and Hitler. It is Black's seventh book on Nazi Germany and the Holocaust during WWII. It is written by a well-known American historian whose parents were lucky enough to escape the Nazi gas chambers of Europe. Black's intensive research in his book reveals new facts of the close cooperation between the Mufti al-Husayni and Hitler and rendered great service to the history of the Jewish people during the WWII in this opus magnum.

Although Black based his arguments on heavy documentation and arrived at new and daring conclusions which upset former conceptions and researches, the United states Holocaust Memorial Museum and a coalition of groups and institutions resisted the inclusion of “information about the Farhud and the Mufti of Jerusalem.”

A recent positive step of the Holocaust Memorial Museum towards the farhud came after a long and strenuous effort made by Edwin Back and his supporters. It is hoped now that the documentation in [Edwin Black's] book, will help the USHMM acknowledge further that “of the millions of Jews murdered in the Holocaust, the ones who lived in Arab countries should not be forgotten. History must never be political, even in a political city.”

Acknowledging that the suffering of the Jews in Iraq and in other Arab Lands during WWII is a part of the Holocaust will emphasize the Jewish united destiny all over the world. It will unite further the two parts of the Jewish nation—the Sephardic and Ashkenazi congregations—by the united memory of the Holocaust. It will be a historical acknowledgment of the united destiny of the Jewish people all over the world. These facts should be taught in schools and universities in Israel and abroad. Moreover, we hope that Israel Ministry of education, Jewish institutes and university departments of Jewish History all over the World, would add these two books to their curriculum, and to translate them to other languages. These steps might at last, bring justice to Jewish history.

Dr. Shmuel Moreh, born in Baghdad, is Emeritus Professor of Arabic Studies, the 1999 Israel Prize Laureate in Oriental Studies, and Chairman of Association of Jewish Academics from Iraq. Dr. Moreh and Dr. Zvi Yehuda edited Al-Farhūd: The 1941 Pogrom in Iraq. 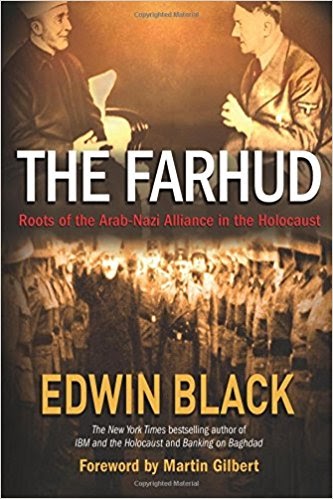