New York Times bestselling author Edwin Black will keynote the nation’s oldest Yom HaShoah Holocaust commemoration, April 27, 2014, at a community-wide ceremony at Shomrei Torah, the Wayne Conservative Jewish Congregation in Wayne, New Jersey. In what is expected to be a riveting presentation, Black will not only explain how IBM consciously co-planned and co-organized the Holocaust, but he will link the methodology IBM invented for the Nazis to the recent headline-grabbing anti-Jewish events in the Ukraine. The event is sponsored by the Jewish Federation of Northern New Jersey and the Jewish Community Relations Council of the Jewish Federation of Northern New Jersey. His presentation is part of Black's ongoing round of appearances in various fora, including the U.S. House of Representatives, British Parliament, EU parliament, and several universities and colleges. See here.

For the first time, Black will allow more than a dozen smoking-gun documents (click here) proving IBM’s culpability to be used as a poster display. The enlarged documents include examples of IBM punch cards, the secret codes IBM used to quantify the pace of gas chamber murders, as well as examples of Big Blue’s “Extermination by Labor” program. The commemoration committee requested the documents as a public service. 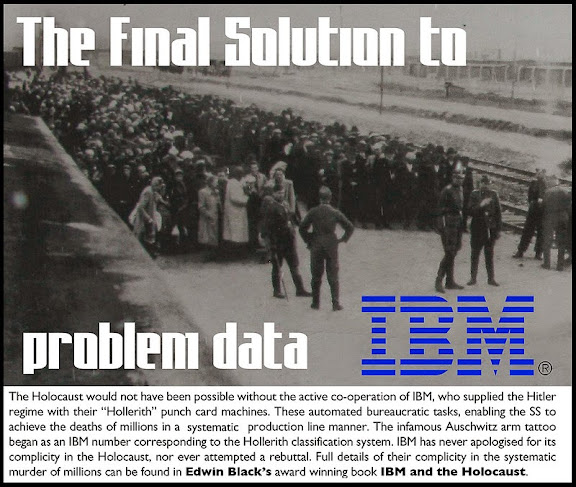 In an interview in the New Jersey Jewish Standard, Black stated, “The methodologies of the Holocaust that I document in ‘IBM and the Holocaust’ — including registration and property itemization — instantly come flooding back to our collective consciousness the very moment unrest subsumed the Ukraine,” he said. “I intend to remind the Wayne audience of this event as a prelude to my more specific revelations about IBM’s role in the Holocaust. And what was that role? A prime mission of IBM was to register all the Jews of Europe for the Nazis. You see that the impulse never dies. In this century, it would be accomplished not with punch cards, but with computers; not with a painstaking 1940s clerical process, but in the twinkling of a digital eye.” 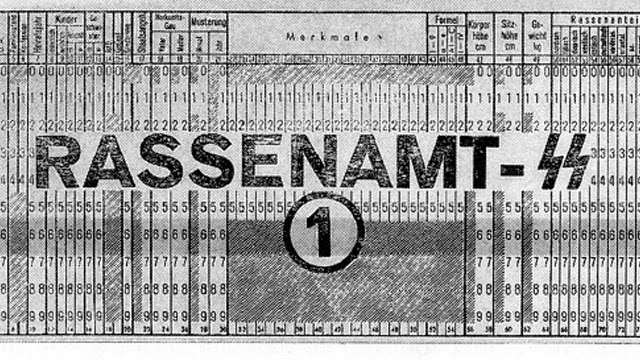 (IBM Hollerith card used by Germany during the Holocaust)
Edwin Black has established a track record of riveting speaking sessions, documenting the conscious involvement of IBM in co-planning and co-organizing all six phases of Hitler's Holocaust:
1) identification;
2) exclusion;
3) confiscation;
4) ghettoization;
5) deportation and
6) even extermination.

(Anti-Semitic graffiti left recently at a synagogue in Ukraine)
The infamous Auschwitz tattoo began as an IBM number. IBM's program of complicity in genocide, purely for profit, was first exposed in Black's international and New York Times best-selling book, IBM and the Holocaust, now with more than a million copies in print in 14 languages in 80 countries. The author has garnered numerous awards for the work and speaks on the topic at campuses and Holocaust museums across the United States and overseas. Despite being flooded by more than a decade of requests from media and communal leaders, IBM has never denied or explained the details of the book.
Newsweek called the book "explosive" and "stunning." The Washington Post review proclaimed the book was "beyond dispute." Der Spiegel declared the work "devastating."
See background material here.