A group of Catholic students in Belgium remains in opposition to Bishop Johan Bonny of Antwerp. Spero reported on January 4 that the Flemish Catholic Students Association of Antwerp issued an open letter to Bishop Johan Bonny denouncing his statements on homosexual marriage. “Monsignor Bonny, as a successor of the apostles, wishes to alter the form in which the faith has revealed it (marriage). As a Catholic association headquartered in Antwerp, the Association of Flemish Catholic Students of Antwerp KVHV (Vlaams Katholiek Hoogstudentenverbod) raises its voice to say clearly: ‘No, Monsignor. What you are proposing is not Catholic.”
In an email response to Spero, Michael Hoffmann  - a spokesman for the student group – said that his fellow students do not current plan any demonstrations against the bishop. However, he said that a broader group known as ‘Pro-Familia’ can be expected to mount a public demonstration against the bishop. In addition, Hoffmann said that his group is taking other action, “We have written and translated a letter that we are sending to the Pope and the Archbishop (Leonard)”.
Hoffmann said that his group does have support, albeit so far very quietly, from numerous priests and bishops, saying “… we have received a bunch of positive e-mails and messages.” Hoffmann would not identify the clerics who support the group.
The Young Socialists of Antwerp have denounced what they called the "downright frightening views" held by the Flemish Catholic students. Their views qualify as "homophobia," said the Socialists who have since issued a complaint to the Belgian the Centre for Equal Opportunity. 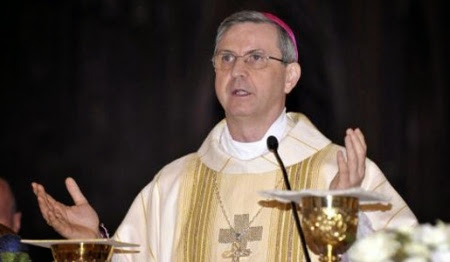 Archbishop André-Joseph Léonard of Brussels faced charges of discrimination against homosexuals after making statements clarifying Catholic doctrine about sexuality in 2007. In Télé Moustique, Leonard was quoted as saying "The same as Freud: it is an imperfectly developed stage of human sexuality which contradicts its inner logic. Homosexuals have encountered a blockage in their normal psychological development, rendering them abnormal. I know that in a few years, I will risk prison by saying this, but it could offer me vacations.”
He was subsequently charged with making a homophobic statement under 2003 Anti-Discrimination Act, after activists claimed that he wanted to “stigmatize” homosexuals. He was cleared of the charge in 2009 when a court found that his statement were neither slanderous nor discriminatory. Bishop Bonny is often cited as a possible successor to Léonard, who is currently the chief Catholic churchman in Belgium.
On December 27, Bonny told the Flemish-language newspaper De Morgen that the Catholic Church should be inclusive of a “diversity of forms” with regard to marriage while advocating for same-sex unions to have the same recognition as Catholic marriage. Bonny told De Morgen, “There should be recognition of a diversity of forms,” and added “we have to look inside the church for a formal recognition of the kind of interpersonal relationship that is also present in many gay couples. Just as there are a variety of legal frameworks for partners in civil society, one must arrive at a diversity of forms in the church.”
“The intrinsic values are more important to me than the institutional question. The Christian ethic is based on lasting relationships where exclusivity, loyalty, and care are central to each other.”
Marriage, in the traditional sense understood Catholic, Orthodox, and most Protestant Christians, have a special place, said Bonny, but “this particularity does not have to be exclusive nor does it have to close the door on a diversity of relationships whose inner qualities the church can acknowledge.”
“Indeed, we need to seek a formal recognition of the kind of relationship that exists between many gay and lesbian couples,” said Bonny. “Does that recognition have to be a sacramental marriage? Perhaps the church could much better reflect on a diversity of forms of relationships. One has the same kind of discussion about civil marriages. In Belgium the same model (for civil marriages) exists for man-woman relations as well as for same-sex relations.”
Bonny’s stated wish for the Church to seek in homosexual unions certain “inner qualities the church can acknowledge” has been seen in some quarters to echo a preliminary document prepared by several high-level churchmen at the extraordinary Synod on the Family that concluded in October 2014 at the Vatican. The language in the preliminary document that suggested that homosexuals have “gifts and qualities to offer to the Christian community” was dropped in the final report that came out of the Synod. However, that final report did state that Christians should treat homosexuals with “respect and sensitivity.”
Before the Synod took place, Bonny sent a letter to the Vatican, saying that Catholics appear unable to accept “the dogmatic texts and moral statements coming from Rome” on topics like “sexual, family-related, and bio-ethical issues.” In the U.S., for example, a 2013 poll by Quinnipiac University found that  54 percent of American Catholics support homosexual marriage, 38 percent are opposed. Even so, Catholic teaching for centuries has opposed not only homosexual behavior but has always defined marriage as being a sacramental state that joins together one man to one woman for life.