In Mexico, approximately 45,000 children and young people have been abducted. According to the Fides news service, many are subjected to sexual exploitation. Rumors circulate widely that children and adults are being subjected to the harvesting of their organs.

Criminal gangs are mainly active in Mexico City and the surrounding State of Mexico, as well as Veracruz, Tijuana, Monterrey, Guadalajara, and in areas bordering the United States, Guatemala, and Belize. The report contends that young people, especially from Central America, are lured by criminal networks, abducted, and then subjected to surgery by corrupt physicians in the United States to remove organs such as kidneys and livers. The report cited unnamed French and U.S. authorities.
Allegedly, victims range in age from 7 to 10 years. Younger children are often kidnapped for adoption. In order to face this serious problem, the Mexican Foundation for the Research on Missing and Abducted children have created a free campaign on the phenomenon of child abduction in the schools in Mexico City, and the states of Mexico, Veracruz and Puebla.
According to UNICEF, 1.2 million children go missing worldwide each year.

According to a report from Mexico, Dr. Fernando Lopez Neblina - a surgeon at a hospital in the border town of Mexicali - said that Mexico's attorney general has never uncovered a single case of forced organ harvesting. He noted that the procedure of organ transplantation is very difficult and requires a specialized team of physicians.
However, there have been cases where it has been determined that organs, especially hearts and livers, have been extracted from children for the purposes of esoteric religious rituals linked to the cult of the so-called 'Santa Muerte' (Ed. note: Saint Death or Holy Death). "There have been indeed cases of kidnapping of children and adults where their organs have been extracted, but never for a transplant. These organs are removed just anywhere as if they were animals and are used for witchcraft. The Attorney General's office has discovered the mutilated corpses of children in common graves, and I have seen corpses whose hearts, liver and other organs have been ripped out; these could never have been used for illegal trafficking," said Dr. López-Neblina.
Dr. Luis Carlos Rodríguez Sancho, a transplant surgeon in Guadalajara, contends that there have been sporadic cases of the murder of children for the purpose of extracting organs and for rituals of propitiation involving the spilling of human blood. 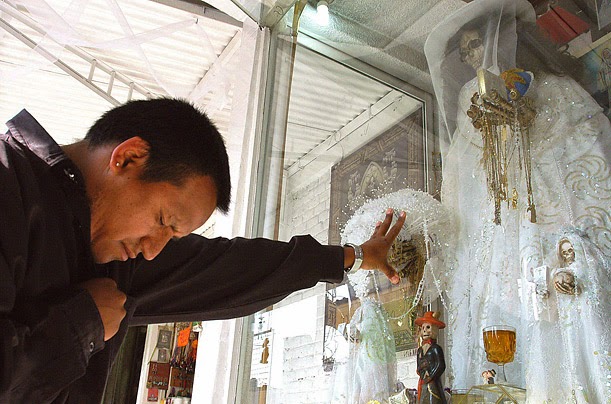 (a devotee prays at shrine of Santa Muerte)
In April 2014, Security Commissioner Alfredo Castillo of Michoacan affirmed that member of the Caballeros Templarios (Templar Knights), a narcotics cartel in central Mexico, uses human hearts in its rituals. As a sign of loyalty, members of the cartel are compelled to eat human hearts in the presence of the Templar leadership. However, since that time, neither Castillo nor any other credible authority has repeated or verified the claim. Beheadings, summary killings, torture, rape and abduction, however, are all common practices among the various cartels in prosecuting their turf wars against each other, as well as against Mexico's military and law enforcement agencies.

According to court documents, two MS-13 gang members are accused of killing a 16-year-old boy who was "just walking down the street" in Hou ...