Loretta Sanchez is no moderate Democrat

Representative Loretta Sanchez, a Democrat who currently represents the 47th congressional district in suburban Orange County, intends to campaign for the seat U.S. Senator Barbara Boxer (D) vacates next year.  Her Facebook page carried a recent post: “Californians deserve a strong voice in Washington and I have never been afraid to speak up, which is why I am seriously considering running for the United States Senate in 2016.”
Sanchez ran in Orange County as a moderate Democrat 1996 but the meaning of “moderate Democrat” is pretty subjective. The American Conservative Union gave her a 'zero' rating in 2009. She is a Roman Catholic. Her sister, Linda, represents the 39th congressional district. They are the first sisters to serve simultaneously in the House of Representatives.
Sanchez is – and has been since she began her political career[1] – an aggressive supporter of legalized abortion.  Among many other things, she voted for the Federal Health Plan Contraceptive Coverage Amendment in 1998; against the Unborn Victims of Violence Act of 1999 (and again in 2004); against a bill to Prohibit Partial-Birth/Late Term Abortion in 2003; and against a 2011 bill Prohibiting Use of Federal Funds For Planned Parenthood.[2]
Therefore, it was something of a shock that in 2009, Sanchez spoke at St Callistus Catholic Church as part of a “Healthcare Prayer Vigil” sponsored by PICO’s Orange County Congregation Community Organization (OCCCO).[3]  PICO is one of the Alinskyian organizing networks that seeks to inculcate progressive political activism into religious organizations. Whether by error or by design,[4] Rep Sanchez was the only political representative invited, leaving the impression that her positions are morally acceptable to the Church.[5]
Sanchez and the Alinskyian organizers go back the beginning of her political career, when she was an IAF-backed candidate running against the pro-life incumbent Bob Dornan.  The IAF (Industrial Areas Foundation) is another Alinskyian organizing network sowing progressive political activism in the churches. 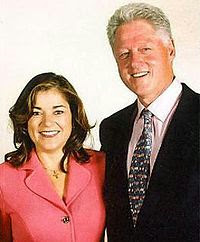 It was a pretty sordid campaign.  The IAF had set its membership to work in a get-out-the-vote drive called Active Citizenship Campaign.  As part of this effort, California IAF organizer, Father Miguel Vega, S.V.D., wrote to Vice President Al Gore: “Through the creation of a permanent precinct organization, 5000 precinct captains will turn out 966,000 voters for the November 1996 elections.”  Vega continued, “Essential to the permanent precinct organization is the naturalization of 180,000 New Americans.”[6]
The IAF proposal presented to Gore stated that its Active Citizenship Campaign was “willing to work with the INS [Immigration and Naturalization Service] to increase the efficiency” of the naturalization process.[7] “Failure to deliver on promises made by the INS,” Father Vega threatened, “could create the impression that the Clinton administration is anti-Latino.” [8]
Gore met with Father Vega and the IAF the following month and provided talking points for the meeting that said: “As you may know, I have been working on reinventing the federal government for the past three years. Because of that assignment the President has asked me to take a look at INS’s naturalization process and see if, using some of the techniques we have used to reform other government agencies, we can help take care of that backlog.”[9]
So, the naturalization process was speeded up as requested and resulted, apparently, in the largest Latino turnout in California history.[10]
One would have expected them to vote consistently with their Catholic values.   Thanks to her IAF backing, however, abortion advocate Loretta Sanchez won.
Of further concern were allegations of voter fraud, specifically that the IAF voter registration drive had registered a significant number of non-citizens.[11]   Orange County District Attorney Michael Capizzi has determined that one immigrant rights group alone registered 590 non-citizens in the county and 547 of them voted.  California’s Secretary of State also found at least 300 illegal voters in the Dornan-Sanchez race.[12]
Nothing was done to address these fraudulent election results and Sanchez went on to serve California as the second highest ranking Democrat on the House Armed Services Committee (HASC) and on the House Homeland Security Committee (HSC).
[1]  “1996 General Election Results,” California Abortion and Reproductive Rights Action League – North.
Also, “WOC Alert 10/25: Day 11 Countdown to Victory,” Women Organized for Change. 11-25-96.
[2] Project Vote Smart: votesmart.org/candidate/key-votes/203/loretta-sanchez/75/abortion-and-reproductive#.VL1YriyPb1Y
[3] Orange County Congregation Community Organization news story, “300 Gather to Pray for Healthcare Reform,” 8-2-09, www.occcopico.org/news_08022009.html
[4] www.youtube.com/watch?v=9Q3i9j0KGWI  (6 minute video) shows pro-abortion Congresswoman Loretta Sanchez with Orange County Congregations Community Organization (OCCCO) at St. Callistus, Garden Grove “Healthcare Prayer Vigil.”  There was no other speaker; a large (about 3’ X 6’) professional sign reading “Congresswoman Loretta Sanchez” had been prepared for the table at which she spoke; and  the OCCCO flyer advertising the event referred to her as the “Guest of Honor.”
[5] Other moral problems have plagued Sanchez, as well.  Locked in a tight race against a Vietnamese-American, she was reported to have made the objectionable racial remark: “The Vietnamese and the Republicans are, with an intensity, (trying) to take this seat – this seat (from which) we have done so much for our community – to take this seat and give it to this Van Tran, who is very anti-immigrant and very anti-Hispanic.”  “Plainly playing the race card: Loretta Sanchez suggests Vietnamese trying to 'take' congressional seat that belongs to Hispanics,” California Catholic Daily, 10-4-10.
[6]  Letter of Father Miguel Vega on Active Citizenship Campaign stationary to Vice President Al Gore, February 1996.  An enclosure contained a list of IAF locals around the country which endorsed the ACC proposal.
[7] IAF’s Active Citizenship Champaign Proposal.
[8] Letter of Father Miguel Vega on Active Citizenship Campaign stationary to Vice President Al Gore, February 1996.
[9] IAF “talking points” for March 8, 1996 meeting between Vice President Al Gore and Father Miguel Vega and other IAF representatives, 3-8-96.
[10] Dennis Love, “Record Turnout by Latino Voters Energizes Organizers,” Los Angeles Daily News, 11-11-96.
[11] The House of Representatives allowed Sanchez to remain seated despite a House Committee investigation that upheld the charges of voter fraud.
[12] “Compromising Elections,” Wall Street Journal, 4-28-97.  In addition to the Wall Street Journal article,  a series of articles in The Wanderer covered this story: “Interview with Congressman Bob Dornan,” 5-1-97; “When LA Priest Says ‘Jump,’ Al Gore Says ‘How High?’” 5-1-97; “Thousands Demonstrate as House Task Force Probes Fraud,” 5-1-97; “Catholic Charities, Parishes at Hub of Vote Fraud Schemes,” 5-8-97; “Stolen Election: Portent of Things to Come?” 5-8-97; “Priest Tells of Pressure to Register New Citizens,” 5-22-97; “Dornan Vote Fraud Inquiry Looks Like Trip Down Endless Tunnel” 5-29-97; “Republican Leaders Say No Funds for Dornan Inquiry,” 6-5-97; “Initial Study Finds At Least 5000 Non-citizens Voted,” 10-23-97.

Spero News columnist Stephanie Block edits the New Mexico-based Los Pequeños newspaper and is the author of the four-volume Change Agents: Alinskyian Organizing Among Religious Bodies, which is available at Amazon.