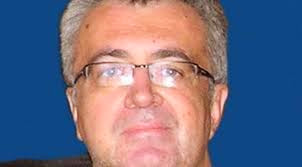 According to Sabahudin, “Social influence produces multiple reflections within an engaging art of writing, and for [him] writing is the art of the soul. Writing produces multiple reflections within a deeply divided society such as Bosnia and Herzegovina, the goal is to have a visible capability to identify ethnic differences, tolerance, artistic environment and obedience.”
For Sabahudin, “On the other side of ‘the bridge’ there is completely another extreme of exclusiveness, anarchism and disrespect (all what has been told on the “left bank of the river” for me on the “right bank of the river” is excluded as nonsense sublimaris )”.
Indeed Sabahudin is perhaps a lone artist who writes by standing on top of the bridge he adds: “on the bridge there is something that can really be a true engaging art of writing with the same deflection from the left and right options. You could call it a civil recognizing of observing critically the reality. The creation of rationale of other possible modalities can be found in a formula that does not exclude, even for a moment, quality at the expense of quantity, and assure that it is not happening vice versa either.”
Sabahudin concluded his conversation by outlining seven ideas and values that could help literature in Bosnia and Herzegovina progress and continue to bridge western cultures with eastern culture while keeping in mind tolerance and coexistence:
1. Strive to not excluding reflection of the foundation of thoughts, and include a fingerprint of direct communication.
2. Applying transparency of your own mission while encountering the face of a naked biography of reality.
3. Refraining from nepotism, national and gender exclusivity.
4. Emphasizing your own flaws as assumptions for the possible solutions – while improving our own beings as we are making substantial contributions to society.
5. By using a non-hatred language as a basic assumption for the initial understanding and in a later phase even though there is proximity of original intentions.
6.Understanding that in the long run the common good/benefit wins while individual good/benefit has a short duration.
7. Embrace an open form of communication with a clear assumption of doing/committing is aimed towards the ultimate truth – citizens are humans in the first place, and after that Bosniaks (Muslims), Serbs and/or Croats.
To conclude, what about the future of literature?, I asked.
He replied: Only through enhancing knowledge. Using one’s knowledge that is based on using facts and not that kind of knowledge that is based on mythology. In order to better illustrate I would like to use an aphorism of mine, ”Why are we having wars here? Aren’t we just three tribes of the same people?”
Spero contributor Peter Tase writes on international business and diplomacy.