Costa Rica is the latest of the American republics to report the presence of the chikungunya virus, following reports from Haiti and El Salvador. Costa Rican health ministry officials reported six cases of chikungunya reported in the Central American country. The six confirmed patients are Costa Ricans who had visited the Dominican Republic, which neighbors Haiti. Those Costa Ricans showing symptoms have not had any additional medical complications or need for hospitalization. According to Costa Rican officials, the virus is still circulating in the country and requires a preventive campaign. While the virus is of African origin, it has since spread to a number of Caribbean and Latin American countries, but also the United States. Cases are found in Southern Europe, Asia, and the Pacific islands.

The Texas Department of State Health and Human Services confirmed this week the eighth known case of chikungunya in the Lone Star State. The latest case was found in Dallas. Other cases have been found in the following counties: Bexar, Dallas, Gonzales, Harris, Montgomery, Travis, and Williamson. These are cases in which the virus was imported, in the senses that travellers to infected areas returned to Texas. However, since the Aedes mosquitoes that transmit the disease live in the Lone Star State, there is a chance that the disease may spread. Also, since many of the Central American illegal aliens who have come to the US during the current surge of immigrants may harbor the disease, they may also be a cause for a spreading of chinkungunya. 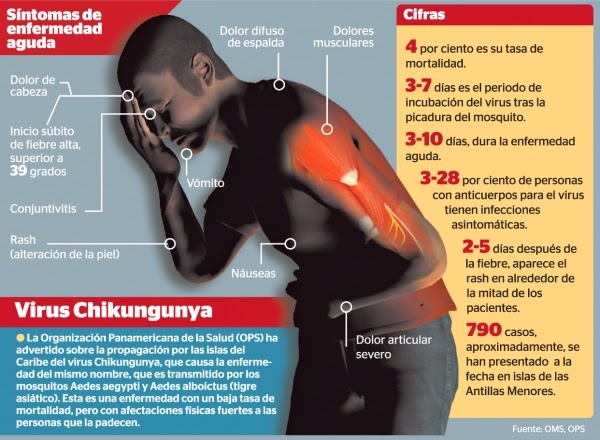 Infections are not always fatal but can cause severe joint pain, high fever, head and muscle aches, joint swelling and rash. Symptoms usually commence about 3 days to one week after exposure to an infected mosquito bite. Unfortunately, there is currently no vaccine or treatment for the virus. Most people feel better within a week, though some people may develop long-term pain in their joints. 'Chinkungunya' means "doubled over" in the African language where the disease was initially discovered: a reference to the severity of the pain.
Chikungunya is not transmitted from person to person contact. However, those infected may become sources of the virus for mosquitoes that then spread the virus to others through their bite. To prevent the spread of the disease, chikungunya sufferers should avoid all exposure to mosquitoes during the first week of illness.
According to the Centers for Disease Control and Prevention, the number of chikungunya cases among travelers visiting or returning to the United States from affected areas in the Caribbean and Latin American will probably increase.
Unwitting dog owners in the United States may be spreading yet another disease. Dogs throughout the state of Texas are becoming infected with a parasite that spreads Chagas disease - a potentially fatal disease among people. An insect sometimes known as the kissing bug, or Rhodnius prolixus, transmits the Chagas parasite when it bites someone's face or lips, especially while victims are sleeping, and leaves behind its fecal matter. While dogs are not actually spreading the disease directly to people, they are making the disease more prevalent in the southern United States. The parasite can sicken and kill the dogs, however.
The Chagas parasite is a protist called Trypanosoma cruzi, which has infected approximately 300,000 people in the U.S. Researchers have estimated that it costs the nation approximately $800 million each year in lost work time and medical bills. 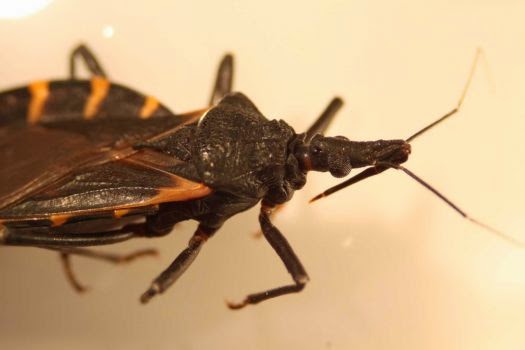 (Kissing bug)
Those infected by Chagas may be unaware of their infection since they may show no symptoms. But in about one third of the cases, the Trypanosoma parasite destroys the heart and digestive system. There are no drugs to cure a chronic condition of Chagas, but only to treat end-stage infection. Once the parasite makes a home in victims' tissue, they are staying for good.
Most people in the U.S. infected with Chagas probably contracted the disease in Latin America, where about 8 million people are infected. Over the last ten years, evidence has been found that it is spreading in Texas and in and around New Orleans. According to researchers, canine infections play a crucial role in maintaining the infection cycle of Chagas. Researchers in Texas tested 205 dogs found at animal shelters throughout Texas and found that approximately 9% of the dogs were infected. Dogs kept as pets or as working animals were not included in the study and thus their infection rate can only be estimated. Veterinarian Sarah Hamer of Texas A&M University told KLTV news "The study was just on shelter dogs," Hamer says. "But we're also looking at other dogs in Texas — working dogs, show dogs, you name it. They are all exposed to and have Chagas. It's common in dogs in Texas."
The risk of dogs spreading Chagas to humans is low. For it to do so, a dog can pass the parasite to the kissing bug only at the beginning of the infection. The kissing bug would have to bite the dog and then its owner immediately after after the dog gets infected.
In Latin America, kissing bugs live in the thatched roofs and mud walls of the precarious homes of the poor. And Argentine researchers have found that having a dog in the home greatly increases the likelihood of contracting Chagas. In Argentina, researchers have concluded that dogs harbor Chagas parasites and serve as a source for human infections. 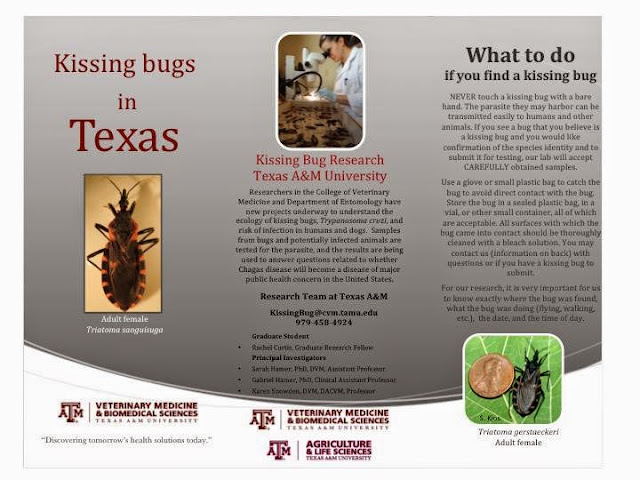