American Catholic bishops and their failure to excommunicate

Can you name one elected Catholic official in the United States who is a convert from being pro-abortion or pro-same-sex marriage to the opposite view?
I can’t. There are, to be sure, pro-life and anti-same-sex marriage officials in both major political parties -- but I don’t know of any who converted to these positions.
There are indeed people who have converted. For example, the Pro-Life Action League has hosted conferences (Click here) presenting former abortionists. Two most notable converts have been the late Dr. Bernard Nathanson (1926-2011), who had aborted thousands of unborn children, and Norma McCorvey, who was plaintiff Jane Roe in Roe v. Wade. Both of them became actively pro-life. Both became Catholic. But neither was a politician.
There have been hundreds of elected Catholic officials, at the local, state and federal levels, largely of the Democratic Party, who have promoted abortion over the 40 years since the 1973 decision of Roe v. Wade. I dare say there is an equivalent number now declaring their support for same-sex marriage. What does the abysmal failure by the Church – hierarchy and faithful -- to convert any elected officials mean? What does it mean for the Church in the United States? What does it mean for our bishops? What have we failed to do?
I am not approaching this question as a failure of the Church or its bishops to influence public policy successfully. It is one thing for us to fail to reverse Roe v. Wade or for us to fail to prevent the adoption of same-sex marriage. But having a Catholic presence in the public square, having a Catholic influence on public policy, is only one of our goals. Our other goal is the saving of souls – the souls of the elected officials who call themselves Catholic. We have failed them. 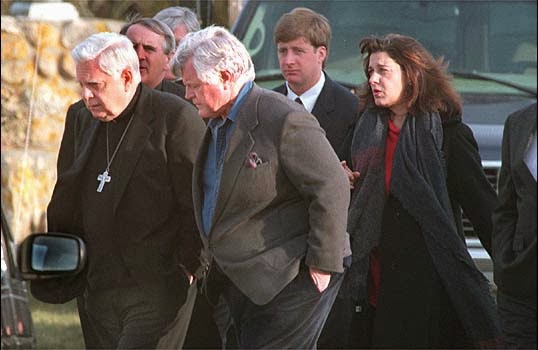 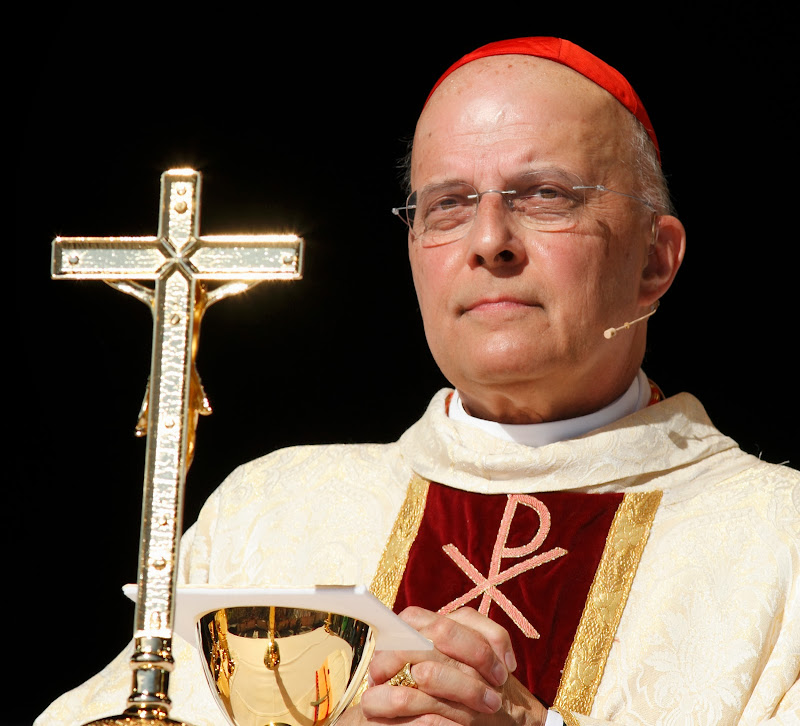 (Francis Cardinal George)
Excommunication sounds harsh. It sounds medieval. It certainly sounds lacking in the pastoral sensitivity the public expects of clergy of any denomination. But it is a way of shaking up a person’s conscience and informing him that his eternal salvation is at risk. It is an act of mercy and charity. It is pastorally sensitive!
Let me just cite two historical precedents.
• In the 1950’s, Archbishop Joseph Rummel of New Orleans (1876-1964) had written two pastoral letters against racism. He desegregated the churches. When there were protests against his assigning an African-American priest to a parish, he closed the parish church. When some objectors wrote to the pope, the pope responded that racism was a grave sin. And, when three Catholics organized protests and a boycott of Sunday collections against his orders to desegregate the parochial schools, he excommunicated them in April, 1962.  One member of the excommunicated trio was Sheriff Leander Perez, a political boss in southern Louisiana and inveterate supporter of racial segregation. He was not reconciled with the Church until nearly the end of his life. 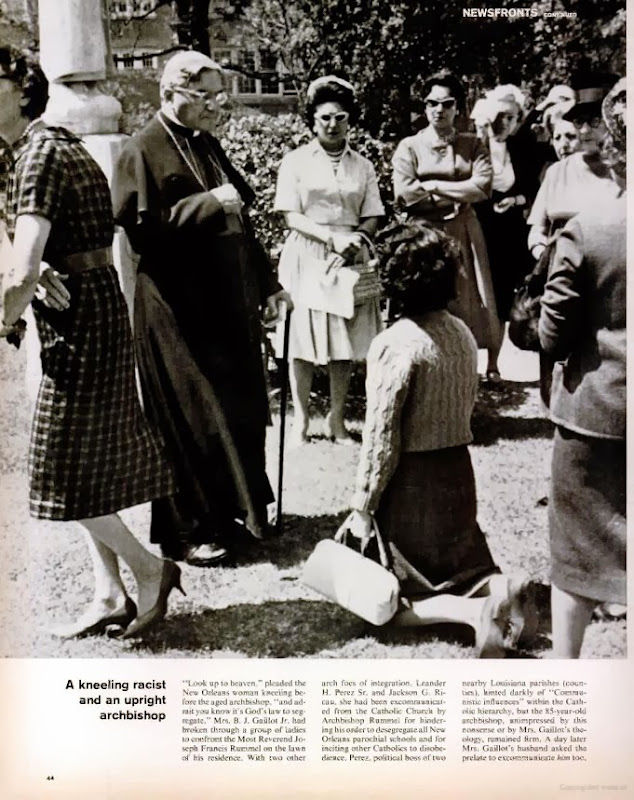 (Above is a page taken from Life Magazine in 1962 showing Mrs. B.J. Galliot Jr. kneeling before Archbishop Rummel asking him to retain racial segregation in Catholic schools. She was one of three Catholics excommunicated for opposing integration)
• There was a report in April 2010, based on new research in Vatican archives by Pave the Way Foundation who had examined German documents from 1930 to 1933. “The documents indicate that any Catholic who joined the Nazi party, wore the uniform or flew the swastika flag would no longer be able to receive the sacraments. This policy set three years before Hitler was elected chancellor made clear that the teachings of the Church were incompatible with Nazi ideology.”  (Click here).
In the United States, Catholics are currently banned from joining the Masons, an anti-Catholic organization. (Rev. William Saunders of the Diocese of Arlington (Virginia), May 9, 1996, Arlington Catholic Herald, The ban on joining anti-Catholic organizations also extends to the Communist Party and the Ku Klux Klan. (Rev. John Trigilio, Jr., and Rev. Kenneth Brighenti, Catholicism for Dummies, ch. 9 (2011).) The Democratic Party does not state that it is anti-Catholic, but since it is pro-abortion and pro-same-sex marriage through and through, it is anti-Catholic and the ban on joining or supporting an anti-Catholic organization should extend to the Democratic Party. (See my “The Rise of the Abortion Party,” New Oxford Review (Nov. 2010), pp. 28-31.)
It takes no courage for a bishop to excommunicate an individual who commits sacrilege by mistreating a consecrated Host, a woman who pretends to be a priest, or an individual who physically assaults a bishop. It does, however, take a great deal of courage to excommunicate a public official. It can be perceived as meddling in politics. If the person doesn’t change his or her behavior, it will be perceived as ineffective. It may cause some priests and faithful to take the side of the excommunicated person. (See the reports above on the reaction to Bishop Tobin’s excommunication of Cong. Patrick Kennedy.) As quoted above, St. Augustine understood all the reasons not to excommunicate, but he also understood the reasons to excommunicate.
And our bishops should not delay – for decades -- in excommunicating. Evil-doers should be admonished, and subsequently excommunicated, early in their political career. If a man or woman speaks favorably during a political campaign of abortion or of same-sex marriage, if they accept donations by groups favoring abortion or same-sex marriage, they should be admonished and, if they do not change their behavior – in a reasonably short period of time, they should be excommunicated. Not because the bishop wants to flaunt his authority. Not because the bishop wants to obtain a result in an election or in the legislature. But because the bishop’s earnest desire, and canonical duty, is to save souls – the official’s, the faithful’s, and his own.
Spero columnist James M. Thunder is an essayist and attorney practicing in the Washington DC area.
Click here for earlier Spero coverage.