The deadly fusion of Nazism and Arab nationalism

“Violent dispossession.” In an Arabic dialect, the word is Farhud. For decades after it occurred, many thought the nightmare was a sudden and unexpected convulsion that afflicted the Iraqi Jewish community, one that lived in that land for some 2,600 years. But in truth, the wild rape and killing spree of June 1–2, 1941 was not unexpected. For years, the Jew hatred, anti-British rage, and Nazi agitation seethed just below the surface, like a smoking volcano waiting to erupt.
Soon after Hitler took power in 1933, Germany’s chargé d’affaires in Baghdad, German Arab specialist Fritz Grobba, acquired the Christian Iraqi newspaper, Al-Alem Al Arabi, converting it into a Nazi organ that published an Arabic translation of Hitler’s Mein Kampf in installments. Then, Radio Berlin began beaming Arabic programs across the Middle East. The Nazi ideology of Jewish conspiracy and international manipulation was widely adopted in Iraqi society, especially within the framework of the Palestine problem that dominated Iraqi politics.
As Arab nationalism and Hitlerism fused, numerous Nazi-style youth clubs began springing up in Iraq. One pivotal group known as Futuwwa was nothing less than a clone of the Hitler Youth. In 1938, Futuwwa members were required to attend a candlelight Nazi Party rally in Nuremberg. When the delegation came back from Germany, a common chant in Arabic was, “Long live Hitler, the killer of insects and Jews.” 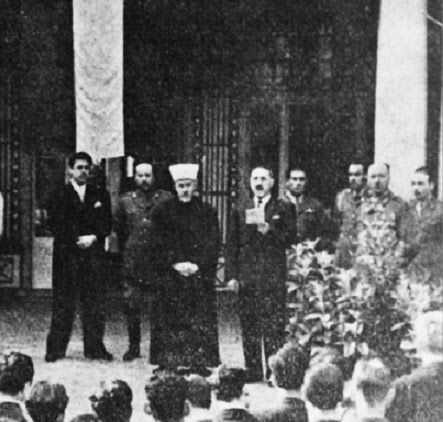 (Rashid Ali al-Gaylani and Haj Amin al-Husseini speak on the anniversary of the 1941 coup)
By the outbreak of World War II in September 1939, the Grand Mufti of Jerusalem, Haj Amin al-Husseini, and a coterie of transnational Palestinian agitators, had thoroughly permeated Baghdad’s ruling circles. For example, Taha al-Hashimi, Iraqi Chief of Staff, doubled as the head of the Committee for the Defense of Palestine.
To lure more Arabs to the Nazi cause, Grobba employed such tactics as dispensing lots of cash among politicians and deploying seductive German women among ranking members of the army. German radio broadcasting in Baghdad regularly reported fallacious reports about non-existent Jewish outrages in Palestine. Grobba, in conjunction with the Mufti, cultivated many Iraqis to act as surrogate Nazis.
By April 1, 1941, with WWII in full swing, a group of pro-Nazi Iraqi military men known as the Golden Square staged a coup, ousting the British-dominated government. Quickly, the Golden Square welded Iraqi actions to Berlin’s iron will. Why did they become partners? The Golden Square wanted Germany to destroy the British and Jewish presence in their country. The Third Reich craved what was beneath the ground — oil. Without that oil, still controlled by a British oil company, Germany could not invade Russia.
An abortive effort to seize British oil and military facilities in Iraq roiled throughout May 1941. But on May 28, 1941, a British military column determined to protect the oil installations finally punched toward the outskirts of Baghdad to defeat the insurgency. The Nazi-allied Golden Square and the Reich’s wirepuller, Grobba, fled the capital. On May 31, at 4 a.m., with the morning still more dark than dawn, the acting mayor emerged with a white flag on behalf of the residuum of official authority in Iraq.
The next day, on June 1, with British authority nominally restored but still withdrawn beyond the outskirts of Baghdad and the Golden Square coup plotters out of the country, the British puppet regent, Prince ‘Abd al-Ilah, returned to Iraq. During the few hours surrounding the regent’s return, a power vacuum existed in the country. It resulted in the bloodbath of June 1–2 that became known as the Farhud.
The original plans for a sweeping anti-Jewish action on June 1, organized before the pseudo-success of the British, were intended to mimic Nazi mass murder campaigns in Europe. Lists of Jews had already been compiled. Jewish homes had been marked in advanced with a blood-red hamsa, or palm prints, to guide the killing. The text announcing the mass murder and expulsion was already prepared and scheduled for radio broadcast.
But Jewish leaders who learned of the impending disaster begged for mercy from the temporary local mayoral authorities, who successfully engineered the expulsion from Baghdad of the massacre planners. The radio broadcast on May 31 merely announced that the British-appointed regent would return to his palace from his temporary refuge in Trans-Jordan. 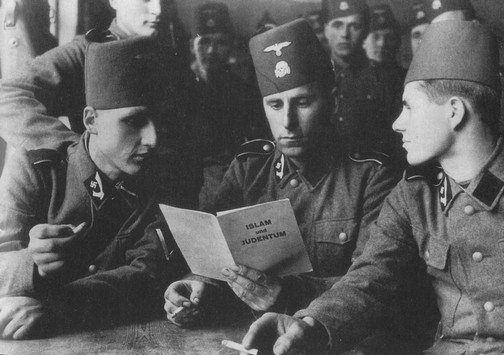 (Handschar Waffen SS Muslim troops read booklet by Jerusalem Grand Mufti al-Husseini)
Baghdad’s Jews had every reason to celebrate. June 1 was the joyous holy day of Shavuot, commemorating when the Law was given to the Jews on Mt. Sinai. Baghdad’s Jews thought stability had returned to their 2,600-year existence in Iraq. They were so wrong.
At about 3:00 p.m. that June 1, Regent ‘Abd al-Ilah had landed at the airport near Baghdad. He was making his way across al-Khurr Bridge to the Palace when a contingent of Baghdadi Jews went out to greet him. As the group came to the bridge, they encountered a contingent of dejected soldiers just returning from their dismal surrender to British forces. The mere sight of these Jews, bedecked in festive holiday garb, was enough to enrage the soldiers.
Suddenly, the Jews were viciously attacked with knives and axes. Several were hacked to death right then and there on the bridge. The planned systematic extermination, now foiled, broke down into a spontaneous citywide slaughter.
Baghdad became a fast-moving hell. Frenzied mobs raced throughout the city and murdered Jews openly on the streets. Women were raped as their horrified families looked on. Infants were killed in front of their parents. Home and stores were emptied and then burned. Gunshots and screams electrified the city for hours upon hours. Beheadings, torsos sliced open, babies dismembered, horrid tortures, and mutilations were widespread. Severed limbs were waved here and there as hideous trophies.
As Baghdad burned, Jewish existence became smoke spires against the sky. Jewish shops and homes were looted and then torched. A synagogue was invaded and its Torahs burned in classic Nazi fashion. Yet British troops remained minutes away, under orders from London not to move in lest it stir Arab sentiment against the oil infrastructure.
The streets were not safe for Jews. Their homes, already well-marked as Jewish residences, were even less safe. Gangs comprised of soldiers, police, and civilian looters invaded Jewish neighborhoods with impunity.
In home after home, furniture was moved up against the door to create a barricade. As the invaders pushed at the doors, more and heavier furniture was shoved into place. The ceaseless battering and kicks eventually made progress, and inevitably, in house after house, the killers broke in. As the Arabs breached the entrances, many families would escape to the roof, one step ahead.
Fleeing Jews jumped from one roof to another. In some instances, parents and siblings threw children down from roofs to waiting blankets below. When there was no place beyond the roof, some Jews held off their attackers with boiling oil, stones, and whatever other makeshift defenses they could muster.
Women were defiled everywhere. Arabs broke into the girl’s school and the students were raped — endlessly. Six Jewish girls were carted away to a village fifteen kilometers north and located only later. One young girl was raped, and then her breasts slashed off — an all too typical crime that day. Young or old, Jewish females were set upon and mercilessly gang raped and often mutilated.
Finally, the Mayor telephoned the Regent, momentarily the supreme authority in the country, and beseeched him to issue orders to loyal troops. That he did. As the order circulated, loyal units began opening fire on the rioters, especially when they turned to Muslim neighborhoods to continue their pillage. Once the shooting began, rioters fled.
Days later, when the Regent eventually restored order, the British entered the city limits. The oil was secure. The Jews of Baghdad were not.
In truth, no one will ever know many were murdered or maimed during those two dark days. Official statistics, based on intimidated and reluctant witnesses, listed about 110 Jews dead. Hundreds were listed as injured. But Jewish leaders said the real numbers were far greater. One Iraq historian suggested as many as 600 were murdered during the overnight rampage. The Jewish Burial Society was afraid to bury the bodies. The corpses were ignominiously collected and entombed in a large, long, rounded mass grave that resembled a massive loaf of bread. 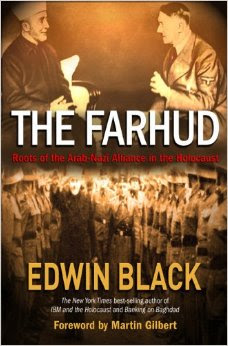 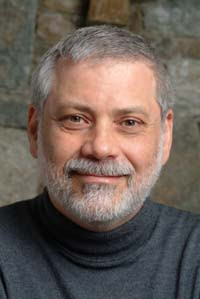