Alfred Kinsey's belief in child sexuality, with all of its impacts on children and society, now circles the globe, but a campaign to reveal the truth about his efforts to legitimize pedophilia is following right behind. Judith Reisman, a visiting professor of law at Liberty University, popular lecturer and former consultant to four U.S. Department of Justice administrations, recently concluded a trip in which she delivered seminars on the fallacies of Kinsey's arguments in Rome, Ireland and London.

One of her books exposing the agenda of Kinsey's lifelong campaign recently has been translated into Chinese. "The Kinsey Institute is very active in the sexology field, holding conferences in every major nation in the world. They've been training the sexologists, sex educators in every country," Reisman told WND. "There's not a single country that educates the public about sex where the institutional position, [the teachers], have not been trained in the Kinsey model," she said.

Her books, including "Kinsey: Crimes and Consequences" and "Sexual Sabotage," show that Kinsey's research was based on "illegal sexual experimentation on several hundred young children."' His research results came not from a scientific cross-section of American, but from "hundreds of sex offenders, prostitutes, prison inmates and exhibitionists," she documents. Kinsey, Reisman explained, used these people to represent the sexual activities and behaviors of the "Greatest Generation."

The"K Bomb," as she calls it - the "studies," claims and "research" launched from the institute's headquarters behind the gothic limestone Indiana University façade - have been used to "subvert" the nation's traditional morality. The impact has been seen worldwide. "People in other countries are contacting me, asking me to please come and deliver the truth," she told WND.

Kinsey's extreme view of sexuality is typified by a statement posted on the website of the North American Man-Boy Love Association, which advocates sex between adults and children. The statement, from Kinsey's book "Sexual Behavior in the Human Female," defends adult-child sex and accuses those who object to it of being responsible for "serious effects" suffered by children.

"When children are constantly warned by parents and teachers against contacts with adults, and when they receive no explanation of the exact nature of the contacts, they are ready to become hysterical as soon as any older person approaches, or stops and speaks to them in the street, or fondles them, or proposes to do something for them, even though the adult may have had no sexual objective in mind. Some of the more experienced students of juvenile problems have come to believe that the emotional reactions of the parents, police officers, and other adults who discover that the child has had such a contact, may disturb the child more seriously than the sexual contacts themselves. The current hysteria over sex offenders may very well have serious effects on the ability of many of these children to work out sexual adjustments some years later."

The acceptance of Kinsey's research of rapists, pedophiles and others has helped foster widespread sexual experimentation and an anything-goes atmosphere. It has resulted in a "gutting" of the nation's tough laws that previously had kept pornography and predators at bay, she explains.

Reisman says that although Kinsey's beliefs are taught at every level of education - from elementary school to college - and quoted in textbooks as undisputed truth, his research was "grotesquely fraudulent." Among her charges is that Kinsey's data came from sources who would stimulate young children, as young as two months, "orally and manually for up to 24 hours at a time."

Reisman has lectured at Princeton, Notre Dame, Georgetown, Pepperdine, Johns Hopkins, the FBI, the U.S. Air Force Academy, the University of Jerusalem, University of Haifa and Tel Aviv University. She has been cited by the London Times, Time, Newsweek, the New York Times and the Washington Post. She has appeared on "Entertainment Tonight," "Larry King Live," "Donahue," the"Today" show and "Crossfire."  She's been listed in "The World's Who's Who of Women."

On her recent trip to Rome, she presented her research to the Alliance of the Holy Family International, including Cardinal Raymond Burke, Cardinal Ricardo Vidal and other leaders of the organization. A Vatican organizer of the events called Reisman's work critical to the ministry of the Catholic Church. Reisman also delivered presentations in Ireland, where she trained nurses and doctors about the true methodology of Kinsey.

"The most fascinating information [developed], for me, during the discussions, when it slowly emerged that abortion, allegedly illegal, was being carried out, apparently selectively, among the Philippine population. The number of allegedly 'dead' babies identified by ... doctors actually shocked these nurses," she reported. "When I left, the Philippine attendees were planning to begin investigating whether indeed they were being targeted for selective abortions and, if so, when this process began." In London, her focus was on creating safe schools, and she reported how sex "education" often is used for sex "indoctrination." "Following the meeting, Jonathan Evans, MP for Cardiff North, and Andrea Leadsom, MP for South Northamptonshire, joined parents in delivering to the department of education a 47,000-signature petition ... calling for sex DVDs to be banned from U.K. primary schools."

Reisman further told WND that following the translation of Kinsey's work into Chinese, some 500,000 copies of his advocacy for pedophilia have been sold. As a result, two credentialed Chinese professors translated her book "Kinsey: Crimes and Consequences' into Chinese, she said.

Meanwhile, her work in the U.S. continues. Last year she was at a symposium for "minor-attracted people" that was sponsored by the group B4U-ACT, which disseminated "accurate information" to argue that pedophilia is just another sexual orientation. "If a foreign country came in and did this to our nation, the nation would be outraged," Reisman told WND about the B4U-Act event, also attended by J. Matt Barber, vice president of Liberty Counsel Action.

The speakers urged the removal of pedophilia from the American Psychiatric Association's list of mental defects in its Diagnostic and Statistical Manual of Mental Disorders. Reisman explained the same strategy was used by homosexual activists in the 1970s when same-sex attractions were removed from the APA's list of disorders. Eventually, the legalization of "gay marriage," the mandatory homosexuality lessons in public schools and the brand new policy of allowing open homosexuality in the U.S. military resulted.


The recent event wasn't a meeting of minor unknowns. "Dr. John Sadler (University of Texas) argued that diagnostic criteria for mental disorders should not be based on concepts of vice since such concepts are subject to shifting social attitudes and doing so diverts mental-health professions from their role as healers," the B4U-ACT organization said in a report about its symposium in Baltimore.

Another celebrity was Fred Berlin of Johns Hopkins who argued in favor of "acceptance of and compassion for people who are attracted to minors," the report continued.
The report pointedly referred to "minor-attracted people" in reference to pedophiles and explained that the concerns can be resolved with "accurate information." Richard Kramer, who represented B4U-ACT at the event, contended listing pedophilia as a disorder stigmatizes the "victims" of the lifestyle choice.

According to Barber, conference speakers said the APA's Diagnostic Manual should "focus on the needs" of the pedophile and should have "a minimal focus on social control" rather than on the "need to protect children." Barber, an ardent advocate for Judeo-Christian values and the traditional family, told WND the symposium was "the North American Man-Boy Love Association all dolled up and dressed in the credible language of the elitist Ph.Ds." "This is a bunch of morally relative, highly educated people in the mental health community who are trying to achieve the ultimate in tolerance," Barber said. "These are the people who are the disciples of Alfred Kinsey." 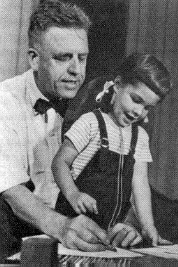 (Alfred Kinsey and child)
Further, a campaign last year was launched in the U.K. to allow convicted pedophiles to adopt children, since depriving them of that privilege could "breach their human rights." "There is no reason why all sex offenders should not be considered as potentially suitable to adopt or foster children, or work with them," said an advocate.

Reisman also cited the decision last week by Greece to expand a list of disability categories approved by the government to include pedophiles and exhibitionists. The Greek government said the list also includes pyromaniacs, compulsive gamblers, fetishists and sadomasochists.

WND Managing Editor David Kupelian, shortly after publication of "The Marketing of Evil" in 2005, predicted publicly that the next "liberation movement" to assault America would be "the mainstreaming of adult-child sex." Now he has noted, "The same godless logic that leads to normalization of homosexual marriage will lead also to the de-stigmatization and decriminalization of pedophilia. Remember, consensuality has replaced morality in today's legal system, so a young person 'consent' to have sex will ultimately trump the old-fashioned desire to protect the innocent. Also, since adult-child sex is a 'cultural preference' in certain non-Western countries, child-molestation lobbyists are now making the argument that criminalizing adult-child sex amounts to condemning another culture. So that's where multiculturalism has brought us."

Bob Unruh writes for WorldNetDaily, from where this article is reprinted.